Not Your Average Sailing Gig

I was asked to skipper this yacht to help the owner check out of the EU after a two year refit in Palma.  The idea was to sail to Gibraltar, clear in and out and then sail back up the Spanish coast to Barcelona where the boat would spend the winter with the owners onboard. Sounds pretty simple doesn't it?

Well suffice to say, things didn't quiet go according to the owner's plan. It's a complicated story to do with Spanish Customs and a tax agreement called the TPA. I won't go into the ins and outs here but effectively to comply with the TPA, we had sail straight to Gibraltar to clear out of the EU.  Instead the owner had his family onboard and a more leisurely cruise was on his mind. We had a few mechanical and electrical problems which forced a side trip to Ibiza where the fun began. The Spanish Customs ordered the boat to the main harbour of Ibiza as we were no longer on our designated course to Gibraltar. This began 8 days of paper warfare and inspections so the authorities could work out why we diverted to Ibiza. 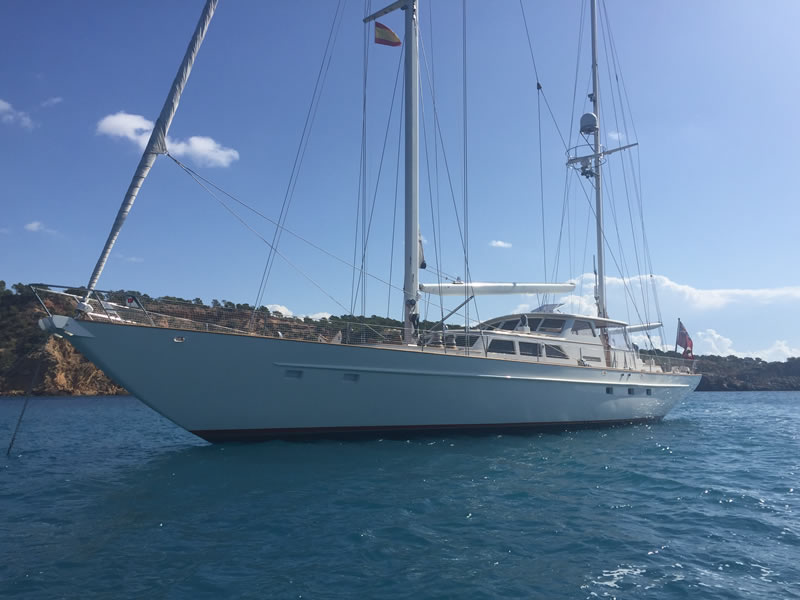 The upside was I got to spend quite a bit of time getting to know the old town of Ibiza, generally chill and catch up on some work. We were berthed in the flashest part of the harbour with lots of comings and goings of various super yachts, guests and crew which made for some pretty interesting people watching. My 'office' was the restaurant opposite our berth where I could setup the laptop and chip away on various jobs for clients. As I've been know to say occasionaly, "things could be worse".

After 8 days ‘confinement’ in Ibiza, we finally got the go ahead and clearance from Customs to leave. We set off at 0800 for the 400M trip to Gibraltar. It was now a pure delivery trip, no more day sailing. The owners family left the boat and I organised two experienced delivery crew to help get the boat to Gibraltar and then onto Barcelona. These guys were both Yachtmasters and because it was a fair bit of boat, I wanted to make sure I had competent crew onboard to handle any eventuality.

After the episode in Ibiza, things went smoothly as we settled into sailing 24/7, with a 3 person watch system, 3 hours on, 6 hours off. We had the owner onboard too and he became ship's cook. A pretty good arangement as he prepared all the main meals but got to sleep all night while we did the watches!

The Gibraltar stopover was pretty uneventful and was just overnight. I've been to Gib a few times and it's not my favorite place so I was pretty happy to get going the next day for the last hop up the coast to Barcelona. The 'iron mainsail' got a fair bit of work as there was next to no wind for the 4 days it took to get to Barcelona. No complaints though as an uneventful delivery is a good delivery.

But this trip wasn't over just yet.

Just when I thought this adventure was over, lo and behold we sailed straight into civil unrest in Barcelona. All to do with Catalan separatists being imprisoned. We had to get our passports stamped back into the EU which meant a trip to the Barcelona Port Authority, 40km from our marina at Vilanova. Our customs agent said we wouldn't be able to get through with fires burning in the streets, key roads blocked and general strikes and chaos. It turned out to be OK as the port was on 'our' side of Barcelona and we didn't have to go through the city and get caught up in the unrest there.

So after 3 weeks onboard, it was a train trip from Barcelona to Madrid and then a flight back to Melbourne.

It was a bit of a whirlwind trip and for discretion's sake, I've glossed over a lot of what went on but that can wait for another time.